Since June 2019, under the leadership of President Su Zhenchang, the Executive Yuan has launched the "open mountain forest" policy, and the Construction Department has also launched "Taiwan Mountaineering Application Integration Information" on June 30 "Net", as the beginning of the forest policy, aims to make it easier for people to apply for entry to the mountains.

Therefore, Wang Junkai, the open government contact person of the Ministry of the Interior (hereinafter referred to as "PO"), proposed this case in the "Open Government Contact Person Work Promotion Conference" ("PO monthly meeting") in August to collaborate with PDIS to transform User experience for the online climbing application process. Under the authorization of Dean Su, PDIS cuts through the technical aspects of system integration and assists in the incurability of inter-ministerial system-to-system interface.

After more than a month of planning and discussion, we held a collaborative meeting on September 6 to work together with Shanyou to design and plan a new online application process in the form of a workshop. The final result is the current Taiwan Mountaineering Application Integration Information Network.

Focus on the user and find the pain points

Under the existing application process, the public needs to take more care to identify the management unit involved in the route they are walking and apply separately. For those who want to get close to the forest, but are relatively inexperienced, it is a bit of a headache.

**Define who is the user of the service (including the digitally disadvantaged). Through continuous user research, design services that meet user needs. ** **In order to design (digital) services that meet users 'real needs and make them happy to use, users (including multiple stakeholders) must be defined, and services must be integrated into users' lives and Need rather than just the services that users or providers want, consider the digitally vulnerable channels that need help, and continue to explore demand for sophisticated services with users. **

In this case, we collected the opinions of the people through a variety of ways, and looked for pain points from the perspective of users.

Since 2017, PDIS has been cooperating with the Youth Department Public Development Department's "Public College Student Department Trainee Program" to implement " Young Students Medical Examination Government Website Plan (referred to as RAY). " Youth are invited to participate in public affairs by improving government digital services. Beginning in 2019, it is different from the large-scale medical examinations for the compatibility of government websites in the previous two years. Instead, we invite college students who specialize in human-computer interaction and service design to carry out in-depth design and transformation of digital service processes for government websites.

One group of RAY trainees chose to improve the online climbing application process as the trainee content. After simple interviews and surveys, they described Persona of the mountain friends, defined the appearance of the target users of the system, and set key tasks to find subjects who met the appearance. Interview.

The students then summarized the opinions collected in the interview and incorporated them into the prototype design. Use Low-Fidelity Prototype (Wireframe) invites interviewees to test the newly designed interface and evaluate its benefits by using service process design methods. after many iterations, the students of the ray project eventually produced mockup of the system interface, as a reference for the subsequent system development.

The challenge of integrating information systems across departments

When creating a one-stop mountaineering application service, the immediate challenge was that entering the forest under the current regulations may involve the jurisdiction of many business units And brought many sub-topics.

The most obvious challenge is to create a new process interface after integrating the application processes in almost nothing. Fortunately, in this part, we already have Mockups made by trainees of RAY. Based on this, we incorporated the opinions collected in the collaborative meeting and fine-tuned them, and we have a pretty good interface design draft.

A friend with experience in product system analysis must know that the integration and optimization of the process interface is only the first step in the integration of multiple systems. The most difficult thing is to integrate the system operation logic that is hidden behind the operation interface, but is not easy for users to discover.

The complexity of integration is greatly increased when there may be more than one and not exactly the same administrative authority in each location.

You can see from the above figure that there are differences in the number of application days, the number of members (membership types), and even the way of drawing.

The differences between these rules include the considerations of the administrative operation process of each management unit. As far as the system design is concerned, it is certainly better to unify these rules as much as possible. However, under the consideration of time pressure, there is not enough time for various administrative departments to sit down and unify the rules. Therefore, being able to handle complex application rules has become one of the major considerations of the system design.

So how do we integrate?

Finally, after a comprehensive system inventory, a huge tree diagram like the one above is generated. There are many things to be solved, but resources and time are limited. Therefore, the first task is to find the core and key from many requirements. Part of the implementation, and set the goal of the system on November 1st; this approach is also known as the industry's MVP minimum viable product (minimum viable product).

We split the one-stop service website into two parts, Frontend and Backend (Note 2).

In order to plan out the range of the smallest viable product, we try to imitate the microservice thinking common in the general industry.

** What is microservice thinking? **

*If you try to imagine a one-stop system as a castle made of bricks, we can simply divide the castle into many different shapes. Building blocks, just find out the building blocks of the required shape one by one for assembly. If a specific shape does not exist, make it; and to avoid spending time and money making new blocks, cut the castle with the existing shape as much as possible as a priority. * *At the same time, remember that when stacking wooden blocks in the past, they were usually made into the most common shape (such as round, square, triangle, etc.), so if you have to make new blocks as a last resort, consider as much as possible. Cut into a universal shape. *

One of the important points in the thinking of stacked blocks is to avoid making new blocks as much as possible, so we choose to keep the existing system.

In the middle is the part where every existing building block is connected with one-stop service-"User Agent", which can be imagined as making a new and old building block adapter.

The RESTful API is used for the connection between the new system and the agent. The API specification is adopted by the National Development Commission based on OAS3 (openapi specification 3.0) "common application programming interface specification".

On 08/28 and 09/06, under the auspices of Tang Feng, held a total of two technical meetings with the ministry and related manufacturers to discuss the aforementioned prototypes.

In the first technical meeting of 08/28, PDIS first proposed the concept as shown in Figure 6 to the ministry and manufacturers. Solicit opinions from various manufacturers and communicate matters that existing manufacturers need to cooperate with.

In the second technical meeting of 09/06, at this time, the technical details of the "user agent" were discussed. There are roughly two directions: the existing vendors implement APIs on existing systems, And other contract manufacturers make APIs through web crawler technology.

The implementation of the National Park Admission by the Police Department, Forest Service, and Architectural Administration for existing national parks, the entry of the Police Department into the mountains, the Forest Service Bureau's protected areas, and the mountain house system are implemented in accordance with the National Development Commission based on OAS3 (openapi specification 3.0) "common application programming interface specification ", so that the original system manufacturers can, as far as possible, target crud / create, read, update, delete) and public information review (such as load limit, balance) implement an application programming interface (api) for one-stop website use.

To assist various agencies within the government to develop cross-domain service integration and implement user-centered service design concepts, to achieve the vision of building a smart government, Under the leadership of the National Development Commission in January 107, the “Guidelines for the Design of Government Digital Services (Draft)” were drafted, and the Government Digital Services Guidelines (Beta) were published in October of the same year, which were provided to agencies for the development of digital services. reference. (Note 1)

The aforementioned mentioned guidelines for grasping government digital services, the fourth of which is:

** ** Continuously Improved Operational Procedures ** Through Rapid Prototyping, Iterative, and Incremental Software development methods, continuous improvement services. In order to respond to technological innovation, policy challenges, and changes in user needs, it is appropriate to consider the changes in user needs, the overall structure of the service, and the maturity of technical resources at all stages of the service life cycle. Iterative development procedures are adopted and continuously included. Give feedback and respond quickly to advanced services.

In this one-stop integrated development process, we tried to follow this spirit, and imitate the industry's software engineering method to request contracted developers to make iterative corrections.

10/01, less than a month after the start of the 09/09 development work, we conducted the first internal user test of the system still under development, and invited those who had participated in the collaborative meeting Civil partners assist in testing, point out problems, and collect and summarize these problems for contract manufacturers to modify.

After a lapse of half a month, 10/16 re-invited the civil partners who participated in the previous test to confirm whether there have been improvements to the questions raised previously, and at the same time to discuss those features that may be added in the future.

Through the coordination of the Ministry of Education, each subsystem (microservice) on the integrated system has a "test environment" and a "formal environment". After the 11/01 system was launched, there were two sets of similar system environments. On the basis, through the cycle shown in Figure 8, the system can be gradually made better step by step.

In the end, in line with the requirements of the policy schedule, we launched the first version of the integrated system in the development schedule only about two months. 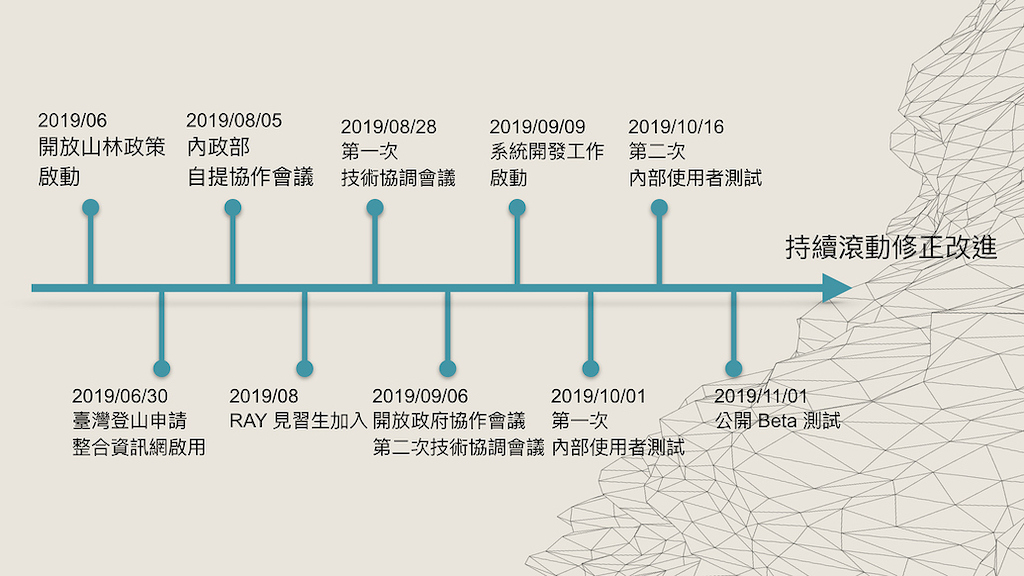 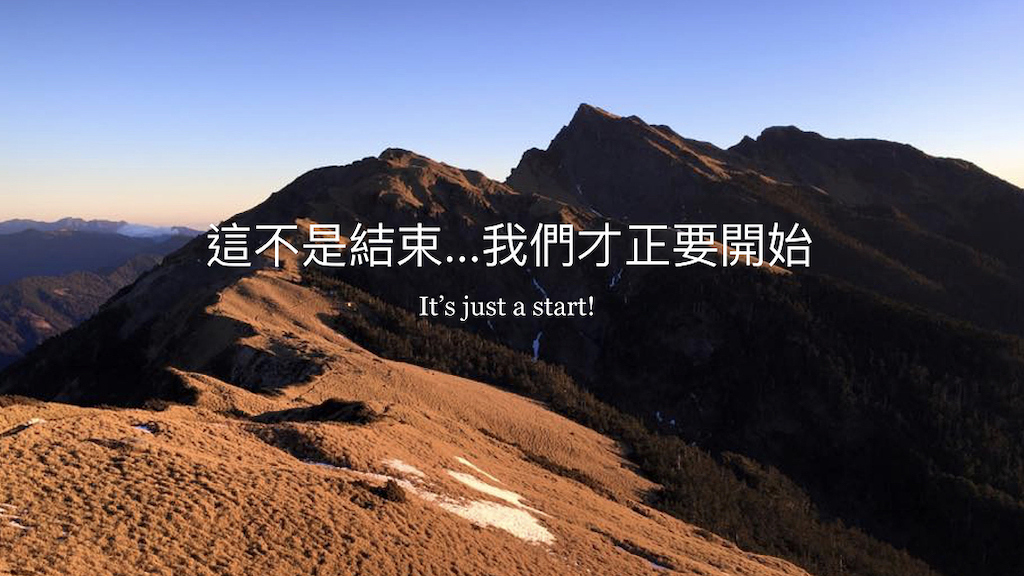 "This is not the end … we are about to start"

Although the system was released on November 1, this is not the end, it is just the beginning.

As mentioned earlier, this case uses iterative development, so after the system goes online, it will continue to consolidate opinions and include continuous revision considerations.

For those matters that are limited by the time-course pressure and excluded from the minimum feasible model, PDIS also sorted it out for reference at the follow-up refinement meeting on December 13.

Note 2: If the general industry defines web services similarly, the front-end Frontend is the web interface that the user can operate; the back-end Backend is the part that the user cannot see on the web server. Taking this case as an example, the design of the RAY students is the front-end design draft; the back part is the part that helps to throw the application form back to the original system.

One-stop service system for mountaineering application
event 2020-02-18
It's not that hard to get close to the mountains!
How to use design thinking to design government digital services?
event 2020-02-18
When design thinking encounters the redesign of digital services in the public sector, plus the collaboration and participation of the people, what kind of sparks will there be? This article introd...

（This work is licensed under a Creative Commons Attribution 4.0 International License.）
navigate_before

How to use design thinking to design government digital services?